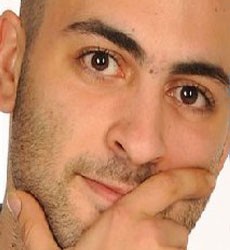 Johnny Madness was born on 1981 in Lebanon, but resides in Toulouse southwest France.

Johnny Madness mostly performs in France and Lebanon, and presents an interactive and funny One Man Show during which he imitates and sings within the human beat box style, a wide variety of songs. He also does "talkbox", along with samplers, keyboards and other effects ...

Johnny Madness was a finalist in Arabs Got Talent 1.

As a child, Johnny Madness began by first imitating his relatives, friends, teachers,... then got interested in sounds of everyday life ( vehicles, street sounds, TV series ...). At that time his musical culture was essentially marked by oriental music and French culture (Joe Dassin, Dalida, Aznavour ...) He arrived in France in 1989 where he further discovered the diversity of the French variety(Brassens, Renaud, Julien Clerc ...). He started imitating them, before moving onto French TV presenters, politicians ...

Help us improve this page:   Correct or update the Johnny Madness page