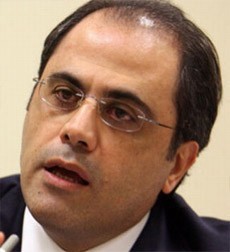 Jihad Azour is a is a Lebanese politician, he was the Minister of Finance during the Lebanese Government of Fouad Saniora between the years 2005 and 2008.

Jihad Azour was born on the 4th of May 1964. Jihad Azour is also an economist.

In the year 1996, Azour recieved a PhD in International Finance from the Institut d'Etudes Politiques de Paris - I.E.P.

Help us improve this page:   Correct or update the Jihad Azour page