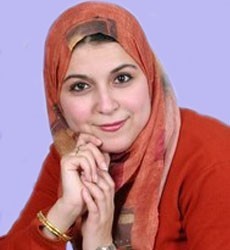 Israa Abdel Fattah co-founded April 6 Youth Movement Egypt in 2008, a Facebook group that gradually became a popular political movement. Israa had met another activist Ahmed Maher two years earlier as volunteers for the El-Ghad Party. Abdel-Fattah, 27 then, had never taken part in any demonstrations or political sittings. She worked in the human resources department of a Cairo company and had only recently begun volunteering at El-Ghad.

Right after, while Abdel-Fattah was sitting with friends at a Cairo cafe popular with activists and intellectuals, she was arrested by Egyptian security.
The detained'Facebook Girl' drew the attention of the foreign media and the few Egyptian newspapers that dared resist the state's censorship, turning her into an overnight symbol for resistance and resilience against corruption and injustice. The heroine was celebrated by other Facebook users who replaced their profile pics to show the face of Abdel-Fattah, in a sign of solidarity.

After two weeks in prison, Israa Abdel Fattah was released, right before she made a brief public statement renouncing political activism for good. She then completely disappeared from the political scene.

Israa Abdel Fattah reappeared again during the January 2011 nationwide protests in Egypt, that called for the end of Hosni Mubarak's regime. Not only was she active on the internet, but also on the ground, updating Al Jazeera TV with the latest news related to the opposition.


Esraa Abdel Fatah Ahmed is above all a civil rights militant, involved with numerous associations, including the Egyptian Democratic Academy. This NGO is financed by the German Friedrich Nauman Foundation for Freedom, and trains young people in media production (radio, video and blogs), and in basic organization administration, legal procedures and election monitoring.

Help us improve this page:   Correct or update the Israa Abdel Fattah page