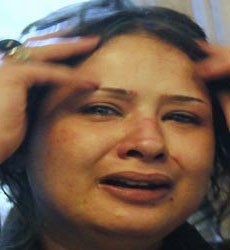 Iman al-Obeidi (or Eman Al-Obeidy) is a Libyan Lawyer that became known to the world on Saturday 26 March 2011, when she slipped into the Rixos Hotel Tripoli that was full of foreign journalists, to show bruises and scars inflicted upon her by Muammar Al Gaddafi militiamen. At one point, she lifted up her black robe to show a bloody thigh.

Troops who had been drinking whiskey had detained Iman al-Obeidi at a Tripoli checkpoint, tied her up, and abused her, before she was gang raped. She was held for a period of 2 days, and raped by about 15 of Gaddafi’s men. Iman al-Obeidi only escaped after neighbors had come to her rescue.

Iman al-Obeidi (Born in 1988) lives in Benghazi, a rebel stronghold. She was on a visit to her sister Amal Obeidi, a resident of Tripoli who operates in the People's watchdog. She was singled out because she had connections in the rebel-held city of Benghazi.


While Iman al-Obeidi was telling her story to the journalists, a hotel waitress brandished a butter knife at her, a government minder reached for his handgun and another waitress pulled a jacket tightly over her head. The waiters told her to shut up after calling her a traitor, and when she continued to try to tell her story, she was physically attacked. The startled journalists tried to intervene, but were pushed out of the way. Eman Al-Obeidy was forced outside into a car that quickly drove away.

The official Libyan Television later portrayed her as a prostitute, to force her into retreating her claims. Government spokesman Moussa Ibrahim first explained to the media that Iman al-Obeidi was an intoxicated deranged person, but later withdrew that statement, informing that she was held in safe custody and her claims were being investigated as a criminal, not a political case. Ibrahim then added, “As far as we know she is a sane person, she is in good health, she has serious claims about four or five individuals. Those claims are being investigated. We believe this is not a political case, this is a criminal case, a lawyer has been offered to her.”

Ibrahim later said that four men had been interrogated in connection with her claim, including a high-ranking police officer’s son, but that Obeidi was a prostitute who had refused a medical examination.

This attempt on the part of the regime to discredit Obeidi was faced by a facebook group called We are all Iman al-Obeidi, created in her support.


Although some sources suggest Iman al-Obeidi has since been released, and is now with her sister in Tripoli, her mother claims she is still being held.

A video uploaded on YouTube on March 29 suggests Eman Al-Obeidy was then married off in a ceremony held at Malak al Sanoussi Mosque (in Tobrok)in the presence of the Lybian rebels...

Help us improve this page:   Correct or update the Iman al-Obeidi page