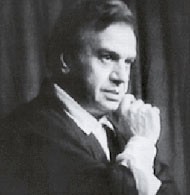 Robert Abraham Farrah was born in the U.S. his parents were Lebanese. He learned to dance, and family in addition to studying ballet and jazz dance.

During the years he deepened the dancing skills, as well as in the U.S. and the Middle East especially Lebanon. Dancing, choreographer, and the conclusion of the research is in addition to Bobby was also a teacher of dance and the data. He published the Arabesque magazine between the years 1975 and 1997.

Help us improve this page:   Correct or update the Ibrahim Farrah page