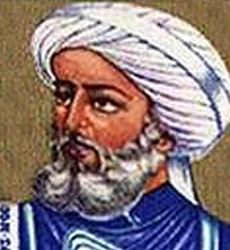 Ibn Khaldoun is one of the greatest philosophers to come out of the Arab world.

Ibn Khaldoun (aka Ibn Khaldun or Bin Khaldūn) was born on May 27, 1332 in Tunisia, and died in Cairo on March 19, 1406. His ancestors are believed to have originated in Hadramut, Yemen.

He served at several political courts in the Maghreb and was known to often conspire against rulers, causing him multiple imprisonments throughout his life. It was during one of those incarcerations in today's Algeria that he wrote his famous Foreword, (Muqaddimah) which would become the first volume of his Universal History.

At the age of 50, Ibn Khaldoun was granted permission from Sultan Abul Abbas Emir of Constantine, to go on hajj via Egypt but turned toward Cairo instead where he was warmly welcomed by scholars and students, and where he lived the rest of his days. In 1382, He received a chair at the al-Azhar University in Cairo, acting as a judge and a teacher of Sharia, Muslim law.

Help us improve this page:   Correct or update the Ibn Khaldoun page