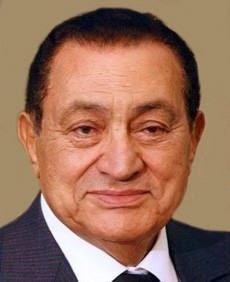 Hosni Mubarak is the fourth and former President of the Arab Republic of Egypt.

Mubarak is a vicious dictator that had taken his people hostage for more than 30 years. His regime has been known to resort to police brutality, secret prisons, and "Baltajiya" (hired x-cons that brutalize civilians) among other morbid aspects. Despite all this, he was for long backed by the west. His reign was so corrupt, he is believed to have become the richest man in the world, with a net worth exceeding 70 billion dollars!

His complete name is Muhammad Hosni Sayyid Mubarak and he was born on the 4th of May 1928 in Egypt.

Hosni Mubarak is considered as the longest Egyptian ruler since Muhammad Ali Pasha.


Between 1972 and 1975, Hosni Mubarak worked as a career officer and a commander in the Egyptian Air Force.

In the years 1987, 1993 and 1999. Hosni Mubarak was re-elected by majority votes in a referendum for four successive terms. Because of a restriction in the Egyptian constitution where People Assembly elect the President of the Republic, it was impossible for anyone else to run for Presidency against Mubarak.

In the year 2009, The Hosni Mubarak government banned the Cairo Anti-war Conference. The conference wanted to criticize Mubarak inability to take any action against Israel.

Hosni has a younger son named Gamal Mubarak who is active in the Political life in Egypt. It was previously believed that Gamal would succeed his father for the Presidency of Egypt.

In the early year of 2011 (starting on 25 January), major protests in the country started following similar protests in Tunisia. The protests aimed at removing Mubarak from his throne. On the 28th of January 2011, the Internet in Egypt was cut off following an order by Hosni Mubarak himself. It was said that even Vodafone mobile provider was ordered to pull down its network until the protests stopped and the situation contained.

Hosni Mubarak was finally forced to resign on 11-02-2011, after the determined protesters led a strong fight, and lost more than 400 between them in Martyrs, and 5000 in wounded.

Mohamed Elbaradei is believed to be a probable future President for Egypt.

In February 2011, rumors circulated that Hosni Mubarak could have Lebanese origins as well. Mubarak is incidentally a very common family name in Lebanon, and other celebrities such as Shakira also hold the same one. The story, which was exposed on Lil Nasher with Tony Khalifeh, suggests that a priest from Rayfun traveled to Egypt where he converted to Islam and married an Egyptian woman. The man supposedly is Hosni's ancestor.

Help us improve this page:   Correct or update the Hosni Mubarak page