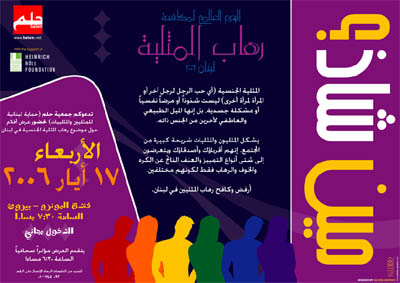 The International Day Against Homophobia - Lebanon 2006

Helem (the English transliteration of the Arabic “dream” is a Lebanese organization working on the empowerment and protection of the Lesbian, Gay, Bisexual, and Transgender (LGBT) community in Lebanon. Since its official creation in 2004, Helem has quickly become a regional reference for LGBT rights and a safe haven for persecuted individuals in need of support and services. To achieve public support in a society that still condemns homosexuality as a shameful crime and taboo, Helem is conducting a large-scale awareness campaign against homophobia.

After the success of the documentary screening “I Exist,” focusing on LGBT Middle Eastern-Americans, to an audience of over 200 people at the Monroe Hotel in 2005, Helem is organizing a week-long campaign for the IDAHO Lebanon 2006. The events include an evening of film screenings on the topic of homophobia in Lebanon on Wednesday, May 17, preceded by a press conference presenting the goals of Helem and the program of the campaign for tolerance against homophobia. Helem will also be publishing and launching a book in Arabic that will include articles from experts in the legal, medical, psychology, social, and political fields, as well as testimonies from victims of homophobia. The week will also include the distribution of thousands of flyers and posters in Beirut, radio interviews, banners on popular Lebanese websites, as well as a series of discussion sessions and social events.

Help us improve this page:   Correct or update the The International Day Against Homophobia - Lebanon 2006 page