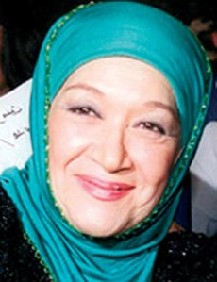 Hoda Sultan also known as Huda or Houda Soultan was a famous Egyptian actress with a long history. Huda Sultan was born on the 15th of August 1925 in Gharbeya governorate from a Turkish mother and an Egyptian father.

She starred throughout her more than 55-year artistic career around 60 movies, 15 TV soap operas and 8 plays. As a singer, she sang about 100 songs.

In 1950, Huda acted in her debut movie which was called Set El Hosn (The Lady of Beauty).

Later Huda met with the late actor Farid Shawki to form a duo that turned afterwards to a romance and they got married.

The duo Sultan and Shawki starred many movies during the fifties among of which are "Al Osta Hassan" (Driver Hassan), (They Made me a Culprit), (Platform No. 5), (The Fraud) and (Whom do you Love).

After her divorce from Shawki in the sixties, she got married to the play director Hassan Abdel Salam. Meanwhile, she participated in few plays such as "Wedad Al Ghazeya" (Wedad the Dancer) and (The Blue Angel).

Sultan is most famous for her roles in great movies like (A Woman on the Way), (Something Deep Inside), (The Choice), (Farewell Bonaparte), (The Return of the Lost Son), the last three were directed by Youssef Chahin. Her last movie was (From the First Glance) (2003).

She played the role of the mother in many TV series such as (Farewell Age Spring), (No, My Dearest Daughter), “Arabesque”, “Zizinia” and the trilogy of “Bain El Qasrain”, the TV adaptation of the novelist Naguib Mahfouz's trilogy.

Help us improve this page:   Correct or update the Hoda Sultan page