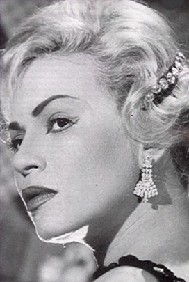 Hind Rostom also known as Hend Rostom or Hind Rustom is a famous classical Egyptian actress who was born on the 12th of November 1932, (some claim its the year 1929 or 1933) in Alexandria, Egypt. Following some Health issues, Hind died in a hospital in Al Mohandeseen on the 8th of August 2011.

Hind Rostom was only 16 year old when she acted her first role in the movie Azhaar wa Ashwak which means Flowers and Thorns.

In the year 1955 Hind rustom came to real fame when Hassan Al Imam, a known movie director, offered her a role in his Banat el lail which means Women of Night.

Hind Rostom had many famous movies which include Ibn Hamidu in the year 1957.

Bab El Hadid or Cairo Station with Farid Shawki in 1958 a movie which was directed by Youssef Chahine.

In the year 1958 the movie (La Anam) which means (Sleepless) with famous names like Faten Hamama, Omar Sharif and Rushdi Abaza.

Hind rostom was considered as Marilyn Monroe of the East, she was a true queen of seduction in Egyptian movies.

In the year 1979, Hind rostom decided to stop acting because she wanted people to remember her for her young and best roles.

Hind Rostom is lying in the hospital since Saturday the night of the 31st of January 2009, following a heart attack hit.


Help us improve this page:   Correct or update the Hind Rostom page