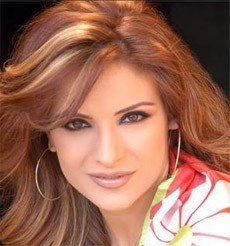 Hilda Kalifa Moudber
Khalife is a one of the recognized TV presenters in the Arab world. Despite her modeling career, Khalife's fame started in 2004 when she began hosting the first season of the pan-Arab televised talent show Star Academy Lebanon, the Arabic adaptation of the French television show Star Academy produced by Netherlands company Endemol.

For the sixth year overlooking Hilda Khalifa on viewers to make the cover of an academic program at its sixth session. Hilda that have been associated with daily events, Balbraim considers that a strong relationship with the guise of an academic. It is happy to provide a "working to refine the young talent and help them to start in the world of stardom, in addition to that by saying" the first program in terms of success and watch, and I love the work of successful.

Hilda is a Maronite from the Bekaa who spent her early years in Australia. She has also lived with her parents house in the region of Fiyadieh near Baabda. She is married to a hotel owner in Kaslik, Jounieh named Marc Moudabber and is the mother of a four-year-old son named Sean and one year old daughter named Sienna.

Help us improve this page:   Correct or update the Hilda Khalife page