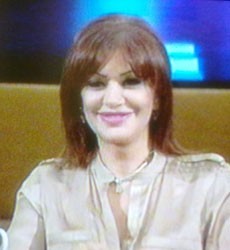 Helene Maalouf is a Lebanese fortune-teller, and coffee cup reader.

Helene Maalouf runs her own coffee shop in Sarba Jounieh called La Tasse, in which she receives her clients. She tells them about their past and their future, using various methods such as coffee cup reading, palm reading , and can also look at someone's features and predict their future.

Helene Maalouf comes from a psychic family of fortune-tellers. Her mother is Rosalie Tabet Abi Aad, no other than Oum Walid the fortune teller.Like her, she is a widow and claims to have predicted the death of her husband.

Hélène Maalouf had predicted, among many other things, the death of Hafez el-Assad in June 2000, the tsunami of December 2004, the Syrian withdrawal in April 2005, the July war in 2006, the arrival of Michel as Lebanese President...

Like most fortunetellers, Helene Maalouf also makes wrong predictions. In 2009 for example, she predicted that the Maronite Patriarch Nasrallah Sfeir would succeed in reconciling Christians, with a reunion in Bkirki of the heads of the Lebanese Forces, Marada and FPM, Samir Geagea, Michel Aoun and Suleiman Franjieh...but this never happened.

For 2011, Hélène Maalouf sees a continuation of the Arab Revolutions, and says the whole region is not feeling so well.

Help us improve this page:   Correct or update the Helene Maalouf page