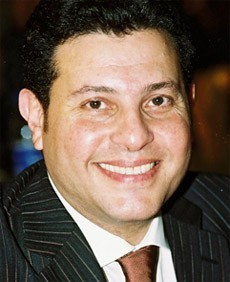 Hani Shaker full name is Hani Abdel Aziz Shaker was born on the 21st of December 1952 in Cairo, Egypt.
Hani Shaker is a very famous Egyptian singer, composer and actor. He is married to Nahla Toufic since 1982, he has one daughter Dina Shaker born in 1984 and a son Sherif Shaker born in 1987.

His first movie work was in a movie about Sayed Darwish where he played the role of Sayed as a young kid.

Hani first musical hit was during his second year in college during the month of December 1972, Hani sung a song written by Mohamed El Mougi.

Hani Shaker has more than 470 songs to date. Hani Shaker first public appearance was when he sang with Abd El Halim Hafez Choral Group in Sora.

Hani Shaker has around 30 albums in his discography.

Help us improve this page:   Correct or update the Hani Shaker page