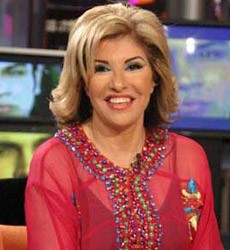 Hala Sarhan is an Egyptian TV presenter and talk show host. She was born on 20 April 1952 in Cairo.

Hala Sarhan (or Hala Serhan) became known for hosting Hala Show, a program inspired by western shows like The Late Night Show, on which she would invite celebrity guests and indulge in taboo topics. She became famous for her strong personality as well as for the provocative & controversial topics she dealt with on her show such as sex, homosexuality, secret marriages, magic, drugs, religion, crime... Sarhane is one of the few female presenters from Egypt to have reached such a high popularity in the Arab World; this is why at one point she was dubbed the Arabian Oprah Winfrey!
Hala Sarhan is known for her sense of Arab nationalism, and strongly condemns American and Israeli violations in the Arab region, thus naturally supports the Palestinian cause.

Hala Sarhan started her TV career in the United States on the Arabic American TV when she got married to famous TV host Emad Adeeb of Orbit (they later divorced). In 1996, she began working on the ART TV network owned by Sheikh Saleh Kamel. She was fired after a conflict occurred with the owners and was recruited by Egyptian private Dream TV owned by business man Ahmed Begat. Serhan rendered the station popular, thanks to her scoops and exclusive interviews, like with Egyptian Billionaire Mohamed El-Fayed. Hala Sarhan was again fired, after hosting guests that criticized Gamal Mubarak on air, before being recruited by Al Walid Bin Talal in Rotana Channels as head of Rotana Cinema. Hala Sarhan gradually regained popularity, first by hosting several interviews with celebrities and Singers before returning to her provocative taboo shows. Many of her guests were known to be controversial such as Nawal El Saadawi.

In 2007, her professional career came under jeopardy when she indirectly attacked Egyptian authorities. Serhan did an episode on prostitution in Egypt, during which one of the invited girls accused the Police of corruption and money extortion in return for protection. Hala was temporarily forced into exile to Dubai, after she was accused of forging their testimonies. The officials wanted her head (something which was quite recurrent with other journalists and politicians under Hosni Mubarak), so the girls were received on El-Mahawar TV in a show called "90 minutes" where this time they claimed Hala had supposedly paid them to say those things.


On 6 June 2011, Hala Serhan returned after 5 years of absence with a new show called Nas-Book (Facebook-people) on Rotana Masriya Egypt. Sarhan was under major attack on Facebook sites where many people objected to her wearing the army uniform in the promotional billboard ads of her upcoming program.


Help us improve this page:   Correct or update the Hala Sarhan page