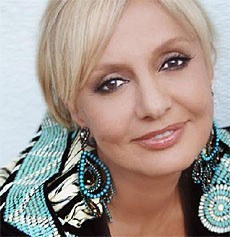 Googoosh also known as Gogoush, Gogosh, Googosh and Gougoush, is a famous Iranian / Persian singer, icon and actress.
Gogoosh real name is Faegheh Atashin, she was born on the 5th of May 1950 in Tehran, Iran.

Googoosh is one of the most renowned singers from Iran. In addition to her singing career, Googoosh was also known as a famous actress in many Persian films especial between the 60s and 70s.

From the year 1979 until 2000 that is following the Iranian Revolution, Googoosh stayed living in Iran, however was banned from recording or performing as was the case with all female Iranian singers.

The young generation appreciate Gougoosh music via bootleg recordings of her music Outside of Iran, she has a significant following in many Middle Eastern and Central Asian countries, and currently resides in Los Angeles, California and continues her music career and rare stage performances in north America and few other world countries.

Help us improve this page:   Correct or update the Googoosh page