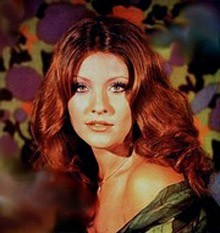 Georgina Rizk, also known as Georgia Risk or Georjina Risk. She was the first and only Lebanese Beauty to become Miss Universe.

In 1971, Georgina Rizk was crowned as the Miss Universe pageant which took place in Miami Beach, Florida, USA.

Georgina Risk was the first woman from the Middle East and the fourth woman from Asia to win the title. In the pageant she made a memorable fashion statement by wearing a very revealing top and hotpants.

Georgina was first married to Ali Hassan Salameh, a Palestinian militant with Black September, who was assassinated in 1979 by the Mossad.

In the year 1972 Miss Universe pageant in Dorado, Puerto Rico, Georgina was not allowed to attend due to government restrictions because of fears of a terrorist attack. These fears were triggered when, two months prior to the pageant, bombings occurred outside the hotel in which Miss USA was then staying. Lebanon did also not send a delegate to the pageant that year.

Help us improve this page:   Correct or update the Georgina Rizk page