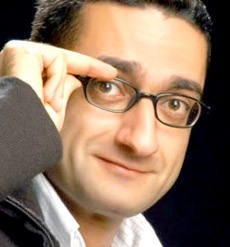 Georges Khabbaz was born on the 5th of November 1974 in Batroun, Lebanon.

Georges Khabbaz is an actor, television director and writer and play writer-actor. He is mostly known for his Burlesque style of humorous theatrical entertainment. His exaggerated performances are mostly what made him popular; a style that he has not been able to break away from ever since his early beginnings, despite his numerous (failed) attempts. His more serious dramatic roles are often not very convincing. In 2007, he starred in 'Under the Bombs' (Taht el qasef) next to Nada Abou Farhat, directed by Philippe Aractingi. The movie had a powerful message and was considered as one of the best Lebanese movies, but many reviews wished the role of Khabbaz was given to a different actor.

He is the son of actors George Khabbaz and Odette gift. Brother and sister, Nicolas Lara, and Laura Khabbaz.

Georges Khabbaz was born into a family of artists, like his father in many plays such as "Sohrip," and several television programs, including "Les Miserables", "Barisiana pavement", "Youth 73", and in some episodes with the "Abu Melhem."

His mother was also represented in many plays, especially in the festivals that were held annually during the month of September in the church "Saint Takla," Bkennaya - Jal el Dib.

He was four years old, when he stood for the first time on stage, in the school during the play "Life of St. Maron," but professionally, he began in theater since 1994.

He has taken part in TV drama series such as "requesting proximity", "Women in the storm", and "ears love."

But George prefers comedy, which he considers as a "message"; the fastest way to get the message through is to give joy and fun to people amid hardships and difficulties of life.

Some of his leading roles in television include:

Notable among his plays:

Re-enact some of the plays to Ziad Rahbani: "Inn pleasure" and "for a virgin Shaw."

Khabbaz says: "Anyone who works in order to earn money without love only his career, failed, but if given the right talent and I love to exercise them as a hobby, hence finding the key to success."

Help us improve this page:   Correct or update the Georges Khabbaz page