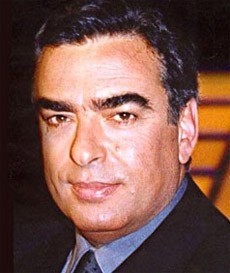 George Kurdahi is a Celebrity television presenter from Lebanon.

George Kurdahi also known as George Kordahi was born on the 16th of January 1956 in Lebanon. Dubbed the George Clooney of the Arab World, the older he gets the hotter he seems to become!

George Kurdahi started his career by working at Lisan Elhala a Lebanese newspaper.

Later, George Kurdahi moved to work at TeleLiban, then to Radio Monte Carlo in the year 1979. He worked for more than thirteen years at RMC, then moved and became Head of News at Radio Orient. Few years later, he became the General Manager of MBC FM.

He quit to present Man Sa Yarbah al-Malyoon, the local version of Who Wants to be a Millionaire?, on MBC 1 television.

In the year 2003, George was headhunted to presented a flagship talk show on the new Al Arabiya channel, then later moved to host Eftah Albak on the Lebanese Broadcasting Corporation - LBC .

Around the year 2005, George Kurdahi launched his own perfume branded under his name.

After a year, he returned to MBC and presented a new run of Millionaire, and a local version of Power of 10.

Help us improve this page:   Correct or update the George Kurdahi page