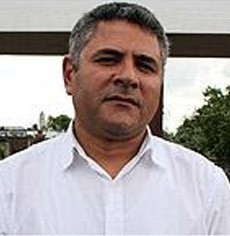 Gamal Eid is an Egyptian human rights activist, veteran lead defense lawyer in many of Egypt's most important cases.

Gamal Eid is executive director of the Arabic Network for Human Rights Information (ANHRI), which he founded in 2004. ANHRI is the largest association for the defence of freedom of information in the Arabic world, built as a network for the surveillance of the abuse of fundamental freedoms.

A former lawyer involved in several high-profile human rights cases in Egypt launched against the press, Gamal Eid has defended numerous bloggers who were targeted by the Hosni Mubarak regime. He supported the Egypt Protests.

Gamal Eid reports that the current violations exceed what was experienced before the revolution.

Help us improve this page:   Correct or update the Gamal Eid page