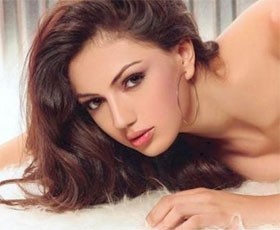 Gabriele is also known for her role as Yasmin in the Internationally acclaimed Falafel, a 2006 Lebanese film written and directed by Michel Kammoun.


Gabrielle Bou Rached was born on the 13th of December 1985. Her father Samih Bou Rached and her mother is Rajaa Bou Rached.

In the year 2001 Gabrielle was crowned as the 1st runner up to Lebanon's Model of the year.

In Februay 2004, Gabrielle was crowned as Miss ETIB at the School of translation and interpretation Beirut.

In May 2005, Gabrielle was crowned as MissCampus of USJ University.

Gabrielle modeled for five years before participating in the Miss Lebanon Pageant which aired on LBC. Like most of the previous winners of this Pageant, Gabrielle was temporarily shunned by the public who preferred another candidate.

Gabrielle also attended Miss Universe 2006 in which she proved to the world that she is not only beautiful, but friendly, lovable and smart.

Gabrielle Bou Rached is known among her close friends as Gab or Gabi.

Help us improve this page:   Correct or update the Gabrielle Bou Rached page