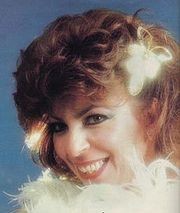 Ferial Karim also known as Feryal Kareem is a Lebanese artist and comedian from the 60s, 70s and 80s.

Ferial Karim was the first female Monolgist in the arab world, she was famous for her comic roles, and her light, close to the people character. Ferial real name was Simon. she started working in theater, television and cinema and radio.

Ferial started singing at the age of seven years old, she also started acting as a child in the Egyptian film, "railroad safety". She later began her work on the theatrical scene of Damascus is known then got assigned to work in radio and television roles.

Feryal Karim most famous roles include, her role as Zomerod "emerald" in the tv-series Al Douniya Hayk (The world is like that).

Feryal Karim was Married to artist Mohammad Karim, and they had a a daughter.

Feryal Karim was known for her dedication to her work of art, to the point that she died on stage on the 4th of July 1988.

Help us improve this page:   Correct or update the Ferial Karim page