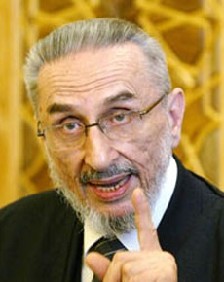 Dr. Fatki Yakan also known as Sheikh Fathi Yakan or Al Allamah Fathi Yakan is an Islamic poineer who became a member of the Lebanese parliament after the 1992 elections.

Fatki Yakan was born on the 9th of February 1933 in in Tripoli. Fatki Yakan died on the 13th of June 2009 after he was admitted to the Hotel Dieu Hospital a day earlier.

Fatki Yakan was married to Mona Haddad with whom he had founded Al-Jinan University, a private Islamic university.

The couple has four daughters and one son.

In an attempt to end the rule crisis which followed the 2006 Israeli attacks on Lebanon Yakan initiated a political effort between Prime Minister Fouad Siniora and his allies on the one hand and the opposition.

Fatki Yakan was the author of more than thirty five books, many of which were translated into other languages.

Help us improve this page:   Correct or update the Fathi Yakan page