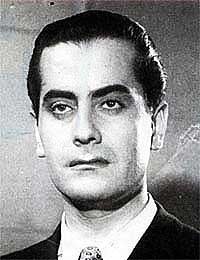 Farid El Atrache, also written Farid al-Atrash or Fareed Al Attrach, is the uncontested Master of the “oud”. He was a melancholic person with large sensitivity.

Farid al-Atrash was an author, a virtuoso of the oud and an Egyptian naturalized Syrian actor. With Oum Kalthoum, Fayrouz, Mohammed Abdel Wahab and Abdel Halim Hafez, he is the most important name in Arab music of the XXe century. He played in 31 films and recorded approximately 350 songs. He also composed the songs for famous singers such as Wadih El-Safi, Warda and Sabah. It was said that his “sad” style will carry on with several other singers hoping to follow in his footsteps. His songs remain well appreciated even today.

Born in Lebanon in 1917, Farid El Atrache came from a family of emirs and kings which reigned on the Mounts Druze. In 1920, his father was named the governor of a Turkish province. At the age of 7, Farid lost his father; and his family left to Egypt in order to provide for the need of the children (3 boys and a girl, Asmahan singer).

In cinema, Farid El Atrache played in several musical comedies, and appeared in 31 films, 9 were produced by him.

Farid allowed the traditional music of the Arab world to embrace the contemporary musical criteria, by incorporating modern rates/rhythms and orchestrations. Many of his first compositions were written for his own sister, Asmahan, a well-known Arab actress and singer. In 1941, Farid's concerts continued to get even more popular, up until the last two months of his life.

Farid is still today appreciated and belongs to the large list of Arab Traditional Tarab Singers.

Help us improve this page:   Correct or update the Farid El Atrache page