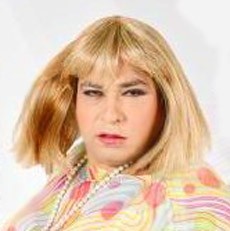 The charismatic Ex Miss Universe, master Shehbeyeh cook and queen of gossip, is back! Fadia El Cherreka (also searched as Fadia Al Sherreka, Fadia Shereka, Fadia Sharraqa, Fadia Al Shereka, or even Fadia shere2a), aka Fadi Reaidi in drag, now has her own talk show which runs weekly every Thursday at 9 pm on Al Jadeed TV. and what a show! This funny oddball is destined to become the next big hit on television, in a record time. Fadia embodies a typical self absorbed woman, who spends her time at brunches gossiping and spreading rumors…that is, when she is not busy with Tinkerbelle!

Actually, the concept for the show has already proven its merits in traditional Pakistan, where Ali Saleem glosses his lips, and dons a sari each week to interview celebrities and politicians on his TV program Begum Nawazish Ali, a sensation in Pakistan. Millions of Pakistanis are known to switch over to Aaj TV, a privately-owned television channel, to watch the Late Night Show with Nawazish, a drag queen that receives guests ranging from Islamic leaders to Indian film stars…

In the Lebanese adaptation “Fadia Tolki el Daou” (or Fadia Sheds Light), the spontaneous Mizz Sherreka plays host with two very lucky (or unlucky for that matter) guests, who completely ignore what awaits them! The men get to be harassed by her incessant flirting and complement fishing, as for the women… Well, they have one full hour to get used to her condescending behavior ;) When they are not being ignored, their beauty is rated and compared to that of “the beautiful natural blond”…ehem ehem…Fadi dear, adjust your wig, it has moved again. As you can imagine, Fadia always wins. The humiliation becomes funnier when the other male guest is forced to choose between them! Those few seconds of embarrassment are priceless!

Although the show is light and meant for entertainment, it does manage however to deal with a new sociopolitical issue in every episode (But in a playful manner of course).

The highlight of the show: The sadistic interaction between Fadia and her beautiful assistant, who is called upon through a loud microphone. She is made to parade on and forth, like a spectacle, to satisfy her mistress’ every desire (no matter how trivial). Fadia doesn’t stop there. She jokes around with her guests at the expense of the poor assistant, and always lets out some snobbish remarks. “Ya haram, she is so ugly, no one will employ her!” (The girl is practically a supermodel in reality)

Fadia also keeps her mobile phone on hand throughout the entire show. God forbids she should miss out on any new gossip! Her arrogance is taken one step further, when her guests are made to wait while she chitchats with a friend, or call her butcher to order a nice piece of mouton for her next shehbeyeh! Yes, despite all the fame and stardom, Fadia is still deep down just a regular housewife that loves to take care of her family.

Sometimes Fadia loses her temper and gets into one of her psychotic states. This is when she leaves her puzzled guests behind, and heads to her private make up room a few steps away, for some alone time. As she lets out some steam and curses loudly, her guests simmer on the set. Best part, they can hear all she is saying. Occasionally, she even includes them in her insults! You cannot but crackup laughing at those hilarious sequences.

The show is one of the best ones currently being broadcasted on Arabic Television, so don’t miss it!

Help us improve this page:   Correct or update the Fadia El Cherreka page