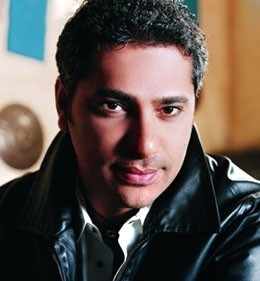 Fadl Abdul Rahman Shamandar was born on the first of April, 1969 in Sadah, Lebanon. After while, Fadl decided to change his name- as his uncle had done earlier- and thus became officially known as Fadl Shaker. As a young boy, Fadl had always dreamt of fame and stardom and kept trying to achieve these dreams ever since he was 16 years old.

In his hometown, Fadl remained a familiar voice in weddings and parties, until finally his golden opportunity came when he composed a song; Matah Habebi Matah. He then got in touch with the famous production company Kheyoul and the company believed in his talent to the extent that they signed him up for 10 years. It was then that Fadl started working on his first album. The Egyptian composer Salah El-Sharnouby was a key player in this process; he worked with the rising singer and the first album Walah Zaman was released in 1998. Given the huge success the album achieved, the singer hit again after just one year with his album Baya'a El-Oloub. This was a major success and its popularity spread widely among the Arab fans in a short time. In 2000, Fadl was ready with his third masterpiece Al-Hob Al-Adeem and then later the same year he put together an album of oldies that he had recorded and named Sahret Tarab 2001. That was not all he did that year though; he also recorded a song for Palestine; Oghneyet Alaqsah.

By now, the singer was on a roll and had achieved fame and success on both the Arab and local level. His fifth album Hobak Khayal hit the markets in 2001 after the release of the immensely successful duet Ahawel; that was performed by him and Kuwaiti singer Nawal. The following year witnessed the release of his hit single Ya Ghayeb and his smashing album Dehket El-Dounya. This turned the singer into a very popular and admired figure among the younger generations. Fadl worked hard to maintain the success and popularity he had achieved with his previous songs and albums. In 2003, his next album Sedey Rohey saw the light and was just as successful as his previous works- if not more! The Lebanese singer recently revealed his latest single Law Ala Albey that is due to be followed shortly by his much expected album.

As for his personal life, it is just as interesting and successful as his work. Word has it that the famous singer met his wife Nadia in a party while he was singing and it was love at first sight. He proposed to her soon after and they tied the knot when he was just 20. The couple now have three children Alhan, Mohamed and Rana.


Fadl Shaker was born in the 1st of April of 1969 in ( Saida ) in South Lebanon ( Ibn EL Genoob), he lives in Beirut in small town called "Marta'ala".

Fadl was very talented young , and his musical talent began from 15 years ago. He has toured wiedly throughout his career as singer organizing private parties and performing concerts in nightclubs where he was singing a lot of melodies for most of Arab legends like Um Kalthoom, Abdul Haleem Hafez, Fareed El Atrash, Mohamed Abdul Wahab and many other famous singers of his generation as well. He had suffered a lot when he was a young to reach such success in his field.

Fadl Shaker is married from pretty woman from Palestine called (Nadia) and he have 2 children, a boy (Mohamed) and a girl (Alhan), and he expecting for his 3rd child.

In 1997 Fadl was famous between his friends and his neighbors and he becomes very famous talented voice, so, he was chosen by (Stallions Company) which was very famous company in recording scope, and he signed a contract with this company throughout their agent in Beirut to produce 3 albums for him ... and it was the real start in Fadl's life.

And in 1998 it was the time for the first album for Fadl Shaker (Wallah Zaman) which contains 8 songs such as Meta Habeby Meta, Nazra Wahda ... and in this album he deals with very known stars in composing and writing like Salah El Sharnoby & Ahmed Sheta.

The second album was "Baya'a El Qolob" released in 1999 and in few days this song becomes # 1 in all charts of channels and radio stations, and due to huge sales he decided to shoot 2 video clips "Baya'a El Qolob" and "Eesheqtak". After this album Fadl become one of Arabic Superstars. and his third album was "El Hob El Adem" in 2000 which contain the very famous song "Ash Men Shafak" and as the previous albums, it was on the top of all charts as well, and his last album "Hobak Khayal" in 2001 which was contain 10 songs this time , was with Al Khoyoul Company and it contains songs like "Hazzak Ya Qalby", "Men Kotr Hoby Feek", and "El Maraya".

In 2002, Fadl recorded and released his first duo with the greatest Khalijian singer (Nawal).... and for 5 whole months this song was on the TOP of all charts and sales records all over the arabic countries and it chosen by all critics to be best duo in the history of Khalijian songs, especially after the hot video clip which directed by (Ahmed El Doghajy).

Fadl Shaker has several composing attempts in his first album in 3 lovely famous songs (Meta Habeby Meta, Maserak Habeby and Ya Tkon Habeby), and other one song in his 2nd album witch was "Malet Ana A'azar" , he didn't compose any other songs in his following albums, but he is preparing for some new tunes in his coming songs, composed by himself.

Fadl Shaker was always concerned about singing hardest Maqamat of arabic melodies in his songs, and he always trying to keep our Arabic Identity in all his songs, he never used any western melodies or trying to copying any other Arabic or Western singer, he always trying just to be himself and to prove himself ... and now, Fadl has his own style and his own high fans.

Throughout his life, Fadl won a lot of arabic awards from all arabic countries for his songs and clips, and in just four years (1998 - 2002) he becomes one of our arabic greatest legends and his fans increase day by day and now he is known between all his fans as "Malek El Romansia" or 'King of Romance'.

Fadl Shaker participated in many Festivals all over the arabic countries... in Egypt, Lebanon, Kuwait, Emarat, and in many other countries, and recently he participated in big Festival in Palestine on honor of ( Holly Intifadah ) with all arabic stars.

Few months ago, Fadl released in all radio station his new hit ( Ya Ghayeb ) which chosen in all channels to be BEST SONG FOR 2003, even before he release his full album or even shoot it, but the song becomes # 1 in all programs and the favorite song for all arabic nations, Fadl bought all rights of the tune of this song from the greek composer and the lyrics are written by the Prince (Turky Bin Abdel Rahman El Sudairy) who also wrote another song of Fadl's coming album called "Dehkat Eldonya".

Fadl's hobbies is fishing in his own boat in his lovely city ( Saida ), and he loves to playing the Piano, and he likes all naval sports, and to listen to old and new music with his wife and kids.

Help us improve this page:   Correct or update the Fadel Shaker page