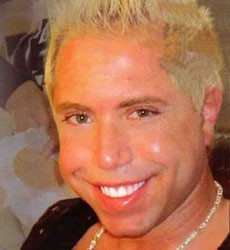 Elie Bassil is a controversial Lebanese journalist and tabloid columnist.

Elie Bassil is known for his eccentric personality, bleached hair, nose job, lip augmentation, and gay demeanor. He refers to himself as 'The Naughty Prince of All Media'.

The reason behind this title is that Elie often attends VIP after-parties, where famous Arab and Lebanese celebrities, singers, and politicians, get together in a cosy atmosphere...In a way he knows all their dirty little secrets. He also tapes via his portable mobile everything that goes on in such gatherings.

In April 2011, his infamous cellular phone (containing all the hot videos) was stolen by the son of a famous politician who was worried Elie would share with the larger public a video of him taped in one of these meetings. Elie warned that person on air, not to release its content if he didn't want to be hurt.
Elie was also accused of leaking the tape that featured Razan Moghrabi (see Razan Moughrabi Sex Video Scandal), but denied those rumors in a televised interview with Tony Khalifeh, during which he defended her stating she was free to do as she pleased, adding he hadn't found anything wrong in the film.

The next day a photo of him (supposedly, as it did not show his face) in a pool without his shorts was published online. Some claimed he was behind its release and not anyone else, as he was desperately looking for fame, adding the photo was already displayed on his personal facebook account long ago and by him personally.

Elie then released a few suggestive photos from his Arab VIPs videos as a payback. The people featured in those videos were however not really famous, except between the elite and VIP (apparently)... Elie says the photos are those of the son of an important political figure with an emerging female singer.

Some journalists mocked Elie, saying those were just pics taken from a random professional video of the genre, that just happen to feature models that bear middle eastern features. Most probably Italian or Spanish. They also attacked Tony for putting in the spot light a wannabe reporter. Elie Bassil called one of them an old hag (most probably referring to Nidal Al Ahmadieh) whose time has passed and who doesn't want to accept the younger journalists with talent. He also reminded her that he has a degree in journalism from the Lebanese University.

More recently the original source of the alleged photos was discovered. As it turns out, Elie simply took the photos from a Hungarian online website, to create a commotion and promote his name and magazine.

Help us improve this page:   Correct or update the Elie Bassil page