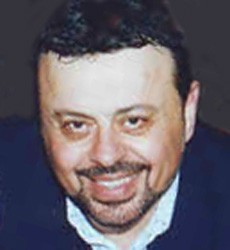 Elie Ayoub is a Lebanese comedian and presenter mostly known for his nickname Dahek El Leil.

Elie loved acting and theater since he was a child. He used to imitate politicians, and celebrity from the middle east.

Elie Ayoub joined Ivette sersouk and Wassim Tabbara as a comedian, while he was still studying at the technical school in Sanayeh, Beirut.

Later on, Elie traveled to America and got a degree in airplane engineering. He came back to Lebanon and worked in the Middle East Airways - MEA for few years. Even-though he was very good at his job, he decided to quit and work in Theater instead.

Elie Ayoub has worked mostly with super-star Ragheb Alameh. He accompanied him in most of his tours, and was the artist who entertained and made the audience laugh.

Help us improve this page:   Correct or update the Elie Ayoub page