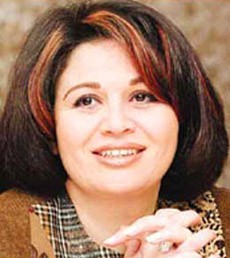 Elham Shahin also known as Ilham Chahine or Elham Shaheen is a famous Egyptian actress who was born on the 3rd of January 1960.

Elham Shahin obtained a Bachelor degree in Dramatic Art in the year 1982. She appeared to the public when Director Kamal Yassin introduced her in the play Houriya Min Al Marikh (A Nymph from Mars).

She first got married to a Adel Hosni, the got separated from him and married a rich Lebanese man, the couple got separated after a major problematic issue.


Elham Started her movie career in the year 1981 in the movie Omahat Fee Al Manfa (mothers-in-exile) and in 1982 in the movie Arr (shame), those movies were the real beginning and the beginning of public knowledge.

The period of the eighties was the most popular of Ilham Shaheen, during which she made 33 films including Al-Sajinatan, Ayam Al Ghadab, Boustan Dam, Al Hajar El Dayer, Al Houb Al Murr, Souk Al Moutaa, Al Akhtabout, Nissaa Bila Tajaroub, Al Raghba, and much more.

Ilham Shaheen won many awards from the Egyptian and world films for her movies Ya Dounia Ya Gharami and Al Gentle.

Help us improve this page:   Correct or update the Elham Shahin page