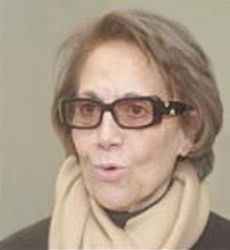 Djamila Bouhired is an Algerian revolutionary (moudjahida), a nationalist that opposed French colonial rule of Algeria.

Djamila Bouhired was born into a middle class Berber family in 1935, and studied in the French School (sole school at the time). She joined the Algerian National Liberation Front (FLN) while still a student activist, and then worked as a liaison officer, member of the "bombs network" and personal assistant of Yacef Saadi, head of the Autonomous Zone of Algiers during the Battle of Algiers. On September 30, 1956, she attempts but fail to set off a bomb outside the lobby of Mauretania, but recruited Djamila Bouazza, who placed a very deadly one that exploded on 26 January 1957 at the cafe "Coq Hardi".


Djamila is considered a national heroine of the Algerian war of liberation. Suspected of being a bomb-setter in 1957, she was charged for her actions and then savagely tortured and sentenced to death. Her execution was halted in 1962 by a media campaign conducted by Jacques Verges and Georges Arnaud.

The life Djamila Bouhired was adapted for film by Youssef Chahine in the movie "Jamila, The Algerian", released in 1958. After seeing the film, philosopher Jean-Paul Sartre testified that his emotion was such that he had forgotten his French citizenship ... She was also depicted in The Battle of Algiers, a 1966 film directed by Gillo Pontecorvo.


Djamila Bouhired was present in 2011 to encourage the youth to follow in the steps of neighboring Egypt and Tunisia in their calls for change, supporting the Algeria Protests. When asked about her past actions, she is often quoted as modestly saying "I did my duty." She calls onto young people to "carry on with their fight today, and to love Algeria".

Help us improve this page:   Correct or update the Djamila Bouhired page