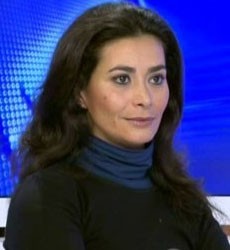 Darina Al-Joundi is a Lebanese-Syrian actress, director, screenwriter, and producer.

Darina Al-Joundi was born on the 25fth February 1968 in Beirut to a Shiite Lebanese mother and a secular Syrian father. He was an open minded journalist that encouraged her and her sisters to explore all facets of contemporary adult life that included sex, religion, and womanhood. She was raised on Baudelaire, A Clockwork Orange, and fine Bordeaux in a lively household where musicians and poets were welcome, and fasting and praying were contentiously discussed. On his deathbed near the end of the war, her father’s last wish was for his favorite song, “Sinnerman,” by Nina Simone, to be played at his funeral instead of the traditional Koran .

The dramatic autobiographical play which is about a female teenage rebellion and obsession with sex, drugs, and rock ’n’ roll in war-torn Beirut, caused such a sensation at the Avignon festival where it was hailed by critics all over France, and later replayed at various theaters in Europe and the USA.

Un homme perdu, by Daniel Arbid, presented at the Director’s Fortnight of the 2007 Cannes Festival.

Help us improve this page:   Correct or update the Darina Al-Joundi page