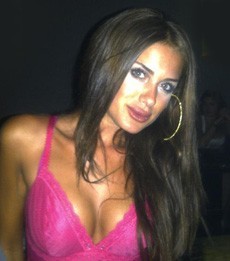 Danielle Salamouny was given the title Miss World Supermodel after competing against 17 other beautiful models from around the world. The title was given to her on the 29th of July 2011, however the event did not make a big impact and news of her winning was pumped into the media one more time around October 2011. Danielle was 22 years old when she was given the crown. In addition to this title she also won Miss Photogenic and Miss Lebanon World Supermodel (which is not the official Miss Lebanon pageant that was organized that year by Lebanese Broadcasting Corporation - LBC). Rumors says that she auditioned at the casting of Miss Lebanon 2011 - LBC but was not chosen among the candidates. Months after, and in collaboration with Murr Television - MTV Lebanon, this new pageant show comes up from Fiji and declares Danielle was a winner.

A quick search on the web can easily tell that the event was not really that international after all. Only Lebanese Media and few local media in Fiji covered the event, in addition to few beauty-pageant blogs from around the world. Nevertheless, it is worth mentioning that Danielle is very beautiful and deserves the title, in fact she is more beautiful than many of the candidates which were chosen for the official Miss Lebanon 2011.

Salamouny is pursuing a Masters degree in Advertising and Marketing. We wish her all the best in both her modeling career and education.

Help us improve this page:   Correct or update the Danielle Salamouny page