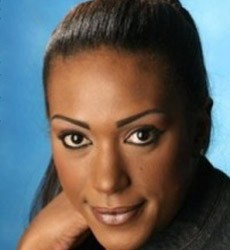 Dalia Ahmad left Sudan while still a baby and has lived in Lebanon most of her life. Although she was never officially naturalized, she considers herself Lebanese. She speaks fluently the local dialect, and behaves in a "Lebanese way"; this is why people got confused when her true origins were revealed.

In 2003, Dalia was temporarily banned from appearing on TV after the information ministry accused New TV(Al Jadeed then) of violating broadcast laws with a "subjective" aired report, and was evicted from the country. She moved to the USA where she joined the crew of Al Hurra TV for two years, before going back to Lebanon in 2005. The terrestrial and satellite transmission of all newscasts and political programs at the station were also temporarily stopped. The ban was not the first time the station faced trouble with Lebanese authorities, but this time Dalia paid the price. The station's international transmission had also been previously halted over a planned political show on the effect of the U.S.-led war on Iraq and on politics in Saudi Arabia. After it agreed not to air the programme, the station resumed its international broadcasts days later. Tahseen Khayyat, the station's owner, was also detained overnight after authorities said he had harmed the reputation of "friendly" countries.

Dalia Ahmad was studying English, with an ambition to become a lawyer, but being a non-Lebanese it was difficult as she could not legally practice the profession, and thus entered the world of television. Khayyat at the time aspired to turn his TV channel into an outlet for all Arabs, and similarly to how many Lebanese reporters and presenters were recruited on other Arab Channels, he also wished to bring on-borad foreign reporters from the Arab world to join his crew...this is how Dalia found her way to New TV.

Help us improve this page:   Correct or update the Dalia Ahmad page