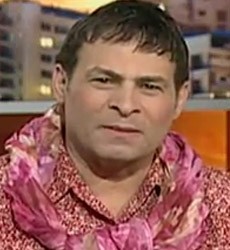 Dabbous Dabbous is a Lebanese comedian who started his career after taking part in Studio El Fann back in the nineties.

Dabbous Dabbous won the Gold Medal in 1992 for the monologue and stand up comedy category. He became part of Al Dababir, a group that presented numerous comedy shows and theatrical plays. Dabbous in the Arabic Language means Pin, and Dababir is wasps. His jokes are ironic and often sarcastically painful, thus the name. The catchy name Dabbous Dabbous was actually suggested to him by Simon Asmar. His family name is however Dabbous.

He is also a talented impersonator (semi gay drag show but with a Lebanese flavor) and often incarnates for some of his jokes the persona Em 3ata, a woman from rural Lebanon. His jokes are often very sexual in nature, with some political jokes as well.

Dabbous Dabbous has taken part in many festivals and mahrajenet around Lebanon, as well as in the rest of the world where Lebanese expats reside. He has been known to also perform for the Arabic public like in the Emirates, ...

Help us improve this page:   Correct or update the Dabbous Dabbous page