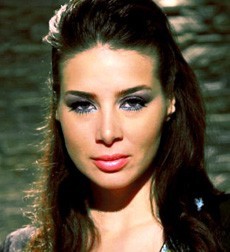 Carolina De Oliveira is a television host and aspiring actress.

Carolina Emanuel De Oliveira was born on the 16h of November 1978 in Damascus-Syria, to a Brazilian father and a Syrian mother. At 13, she left her native country of Brazil (where she spent her childhood) to settle down in Lebanon. Carolina studied at Jesus & Mary School, and later also temporarily lived in France to obtain a Master’s Degree in Fashion Design at Universite de Lyon.

Many assume Carolina De Oliveira to be Lebanese, for although she has an obvious exotic Latin name, she became mostly popular in Lebanon after appearing in the media as a TV host. She first joined the Future TV network in 1997, before moving to Orbit TV (Oyoun Beirut ) then NBN (Al Sabahieh, 3al Moda, 3al Etiquette, and Special) . Carolina is however mostly known for hosting the TV Reality Show 'The Biggest Winner' (Season 1, 2 & 3) on MBC. She had joined MBC in 2002 and previously presented many of their programs such as the fashion focused Enti, Wakif Il Sa3a, She Style, and Lux Fashion World.


In 2004, Carolina De Oliveira was appointed as the official ambassador for the Ruban Rouge organization against HIV-Aids in Africa and the Middle East area, along with her friend Razan Moghrabi.

Help us improve this page:   Correct or update the Carolina De Oliveira page