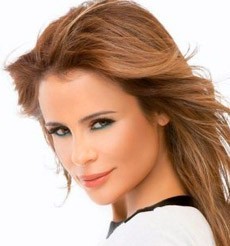 Carole Samaha is a Lebanese singer and actress.

Carole Samaha, also written Carol Semeha, was Born and raised in Lebanon alongside her two brothers.

Since childhood, Carole Smeha has always been fascinated by music. She was equally sensitive to the charm of the theater, which she first embraced.

At school and since childhood her talent was obvious. A career in the Industry was therefore inevitable. As soon as Carole graduated from school, she decided to study drama.

Carole Samaha graduated in 1999 from the St Joseph University of Beirut, with a masters degree in Acting and Directing.

All throughout her acting career, Carole was always chosen for the leading female roles. She was famous for her high acting skills, especially her sharp shifts from one end of the emotional ladder to the other with great ease and persuasion. Although she took part in TV soaps, she mostly excelled in the roles of strong liberated historic women in important Rahbani musicals, such as Theodora in The Last Days of Socrates of 1998;She also played in Abu Tayeb Al Mutanabi and Al Nizam Al Jadid. Her first great breakthrough actually came on the hands of Mansour Rahbani, an Iconic composer and producer from Lebanon. Mansour recognized her talent and for a while she became a recurrent figure in all his plays. Not only was Carole very gifted on stage and could easily embody very different personalities, she also possessed a unique voice with a rare timbre; An important asset in Musicals!

Her songs from the plays took a life of their own and started to air on most Lebanese radio stations.Despite her fame at the theater,Carole felt it was time to move on and give her other passion a break.

Her first attempt was in 2000 with a hit single "Bi Sabah el Alf el Talet” (Enta Meen), yet another Mansoor Rahbani collaboration. The song was so powerful and so beautifully sang that Carole became the number one singer on the charts overnight. Carole first appeared on Television on the Lebanese Broadcasting Corporation - LBC during the New Years Eve of the new millennium; she was wearing an elegant red dress which gave quite a statement.

But the style of the song was too classical for Carole, who aspired for a more modern image and a place in pop culture. She also desperately wanted to stand out on her own without the help of her guardian, to prove to herself that she was capable.
It also became obvious in the following years, that Carole had a secret love for glitter, glamour and bling bling...and started showing the famous Mariah Carey symptoms! But her sexy image wasn't revealed to the public right away.

Carole then teamed up with Nadine Labaki (famous for her work with Nancy Ajram), who directed the video of another big hit called Habib Alby, which this time grabbed the attention of the whole Arab world. A profoundly Arabic melody ingeniously drenched in modern rhythms and electronic sounds; A masterpiece to many connoisseurs.

In 2007, Carole went back on stage as Zanoubia in yet another Mansoor Rahbani play, after 5 years break.

Today Carole's image has completely changed from when she first started. She has gone mainstream be it in her looks or even her musical choices. Her repertoire aims to satisfy the largest Arabic audience possible, and includes all sorts or dialects and sounds ( Khaliji, Iraqi, Egyptian etc...)

In 2015, Carole released a videoclip for her song Al Shark Al Azim, the clip was directed by Global Network for Rights and Development (GNRD).

Help us improve this page:   Correct or update the Carole Samaha page