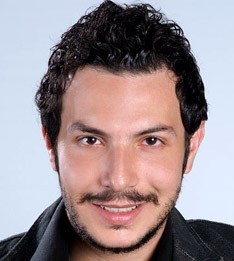 Basel Khayat was born on the 28th of August 1977. In 1991, Bassel completed his acting studies at the High Institute of theatrical Arts in Syria. He appeared in many small roles in television series for few years, then gradually moved to main roles. He is mostly popular for his role in the Syrian television series: Abnaa Al Qahr.

His role model in acting is Omar El Sharif, Mahmoud Morsy, Ahmed Zaki and Abdalla Ghayth. He also likes the works of his colleagues in Syrian drama namely: Khalid Taja and Bassam Koussa.

On the international level, Bassel likes the works of legendary names such as: Marlon Brandoo, Al Pachino and Robert Di Nero.

Help us improve this page:   Correct or update the Bassel Khayat page