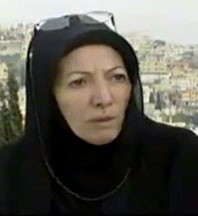 Aziza Ibrahim is an ex- female bodyguard of Muammar al-Gaddafi.

Aziza Ibrahim comes from Aynata Lebanon. She was a "Rahibat Sawriya" (revolutionary nun) in Gaddafi's all women security unit, a special force that was responsible for his personal safety.


In 1982, Aziza Ibrahim moved to Libya where she met with Muammar Al Gaddafi in a student exchange program for Al Nasiriyin. She then accompanied him on her first mission in China. To become one of those chosen ladies, Aziza explains they had to be noted for their strong personality. They were expected to be very independent, and forget about marriage or any form of previous family ties. The main two women leaders were always black, supported by the other 10 women assistants.

Aziza Ibrahim was no longer one of his female bodyguards when the revolution against him erupted in Libya in February 2011. She had long before witnessed the atrocities of his regime, when they were made to attend numerous executions. She says today when watching him on TV, that if she were still one of his bodyguards she would have most certainly taken him down herself!

Help us improve this page:   Correct or update the Aziza Ibrahim page