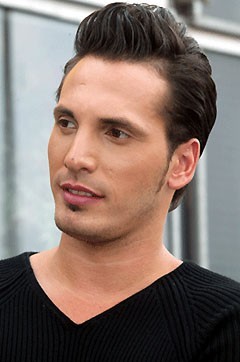 Aziz Abdo is a Lebanese-Jordanian model turned singer, and titleholder of Mister Lebanon 2001.

Aziz Abdo was born in Beirut to a Jordanian Mother and a Lebanese Father. Because of the war, he had to move with his parents to the safer Sweden.

For a short while in his early years, Aziz worked as a professional football player, winning many tournaments.
At the age of 17, Aziz Abdo became a model and signed with Scandinavian Models, which helped him get many advertising offers and fashion shows. He then signed up with Stockholms Gruppen, the most prestigious modeling agency in Sweden. He did a lot of fashions shows for a variety of top line fashion designers, including Giorgio Armani, Gucci and Lagerfeld.

At 20, Aziz returned to Lebanon where he became the protege and partner of Nathalie Fadlallah, who opened all the doors for him in Lebanon and the Arab World.
In 2001, Aziz Abdo earned the title of Mr. Lebanon, which placed him even more under the spotlight.
Teaming up with JiJi Lamara, he sought a career in the pop music business. Although his voice range was limited, his charm and sex appeal (topped with hot music videos) made up for it. His first single was Jaou Jnoun (Crazy Atmosphere), it was the first song Aziz chose for his future debut album, arranged in Studio Saba with Mr. Tony Saba. The video was shot with director Rindala Kodeih. Aziz also collaborated with leading names in the music industry such as Mr. Tony Abi Karam, Mr. Salim Salameh, Mr. Mounir Abou Assaf and Mr. Haytham Zinji. Aziz Abdo‘s debut album was born.

On the 6th of August 2004, Aziz Abdo released his debut Album. He then released his second music video Wallaat El Nar directed by Salim El Turk.

Aziz Abdo is also an actor. In 2011, he had a small role in Sorry Mom Lebanese Thriller Movie.

Help us improve this page:   Correct or update the Aziz Abdo page