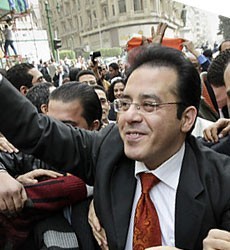 Ayman Nour is an Egyptian politician, and the chairman of the El Ghad party.

Ayman Abd El Aziz Nour was born on the 5 of December 1964, in El Mansoura, Egypt.

Ayman Nour is considered Egypt's leading dissident figure on the political scene, and has insistently wrestled with the Hosni Mubarak regime by previously running for presidency. He challenged him in 2005, but came in distant second.

Ayman was sentenced to five years in prison in December 2005, on charges of allegedly forging some of the signatures required to register his political party Al Ghad (Tomorrow or Future). He was arrested on January 29, 2005. While in prison, Nour’s case received much international attention, including mentions by the White House press secretary and President Bush, but he was only released on February 18, 2009 on health grounds.

The El Ghad party was created to support human rights issues in Egypt, and to represent a liberal democratic perspective. His wife Gamila Ismail, who was deputy chairman of the same party, resigned from her position in November 2007.

Ayman Nour after his release: "I am denied all rights. My party cannot return to the political scene. I am stalked by the police. They are even messing with my personal life. There is no ceiling to the injustice and the revenge of this regime."

Help us improve this page:   Correct or update the Ayman Nour page