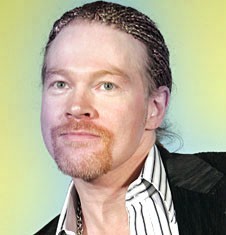 Axl Rose is a famous American musician, He was popular as the frontman of the well known hardrock music band Guns N Roses.

His full name is William Bruce Rose, Jr. he was born on the 6th of February 1962.

Axl was raised in Indiana, United states. His family had many problems. His passion for music became nourished by his singing in church, and at schools. Axl Rose started by learning to play the piano.

In the year 1982, Axl Rose moved to Los Angeles where he worked with few local bands, and finally formed the group Guns N' Roses aside his band fellow singer Tracii Guns.

Help us improve this page:   Correct or update the Axl Rose page