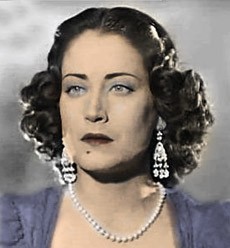 Asmahan is a famous classical Syrian Egyptian singer and actress from the Middle East.

Asmahan immigrated to Egypt when she was still a child, she became the apprentice of Egyptian classical music pioneers, Dawood Hussni, Mohammed Al Kasabji and Zakariya Ahmad.

Her voice was the only voice from the Arab World to have ever competed with that of Um Kulthum, the Arab diva of all times and the most distinguished singer of the 20th century. It i said, she might have even paid for it with her life...

Asmahan mysterious and early death by drowning in a car accident at the age of 26, drew speculations about tribulations in her personal life and an espionage role in World War II. Tabloids also pointed to the possible implication of the jealous Oum Klsoum, who could not stand the competition.

Help us improve this page:   Correct or update the Asmahan page