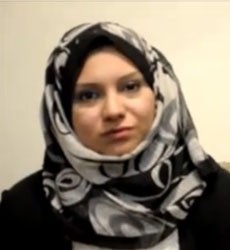 Asmaa Mahfouz is an internet activist, part of the April 6 Youth Movement Egypt and member of Egypt's Coalition of the Youth of the Revolution.

Asmaa Mahfouz is one of many young leaders of the Egyptian revolution that brought an end to the U.S.-backed Hosni Mubarak regime, just like Wael Ghonim, Nawara Negm, Israa Abdel Fattah, Hosam Yahia, Nora Younis, and many others.

Asmaa Mahfouz created a video call on YouTube in mid-January in which she urged "all young men and women" to leave their computer screens and converge on the streets of Egypt on Jan. 25 to protest the brutal and corrupt rule of the 82-year old Mubarak.


Asmaa Mahfouz was born on February 1st, 1985. She holds a BA in Business Administration from Cairo University.
Asmaa was also nominated for the Arab Revolution Women Award in 2011.

Help us improve this page:   Correct or update the Asmaa Mahfouz page