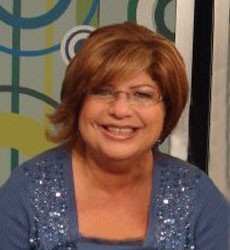 Arze Chidiac is a Lebanese TV presenter, co-host of LOL on OTV.

Arze Chidiac became an overnight sensation after she appeared on the comedy TV show Lol on Orange Television - OTV in 2009. She was completely unknown before that! A regular housewife and homemaker that was put on TV just because of her noted skills in joke telling among friends and at friendly gatherings, Arze Chidiac broke the stereotype of what a Lebanese and Arab TV presenter is expected to be like. Neither her advanced age nor her extra pounds stood in her way. On the contrary, these were most probably why people could relate to her, as she appeared to be just your regular next door neighbor type of person. She is also quite a liberated woman, and does not mind telling a few dirty sex jokes, which made the controversial program one of the most watched shows on Lebanese TV!

Arze Chidiac also showed a lot of chemistry with her co-host Hisham Haddad.

Arze Chidiac was awarded by the Banadoura Dor committee a special award for her distinct uplifting laugh, and her ability to bring joy to the gloomy hearts. She was named Funniest Woman of the Year 2009-2010, and nicknamed Bonbonit el Dehek and Petit four el Hadameh.

Help us improve this page:   Correct or update the Arze Chidiac page