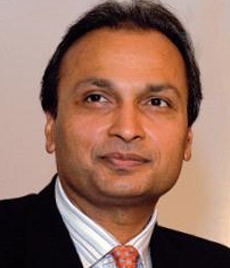 Anil Ambani also known as Aneel Ambani is an Indian businessman and a very wealthy person, he was born on the 4th of June 1959. He is the younger brother of Mukesh Ambani and the son of Dhirubhai Ambani, the founder of Reliance Industries Limited.

Anil Ambani had a net-worth of US $12.5 billion as of early 2008. His wealth tripled in 1 year which made him the world's fastest-growing multi-billion-dollar billionair.

During 2006-current, he's also in the limelight due to his increasing disputes with his own brother Mukesh Ambani.

He is a close friend of movie star Amitabh Bachchan, He is married to tina Ambani (Munim) who was a well known Indian Actress in early 80's, and with whom he has two sons, Jai Anmol and Jai Anshul. He has been linked with buying Newcastle United and Everton premier league football clubs.

Help us improve this page:   Correct or update the Anil Ambani page