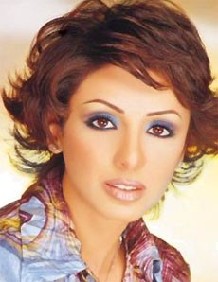 Angham is a famous Egyptian singer of the mid music era, Angham is also a music producer and an actress.

Angham was born on the 19th of January 1972. Angham first album was released in the year 1987 with the help of her father, Mohammad Suleiman.

Angham was the most successful vocal female artist during the 80s in Egypt.

Angham is popular for her vocal range and melismatic style.

Following her divorce from Magdy Aref in 2000, Angham took much more control over her image and musical style after that “Leih Sebtaha” (Why Did You Leave Her) record established her into a strong position amid the constant emerge of new voices in the Middle East music scene.

In 2005, she released Bahibbik Wahashteeny - I Love You, I Miss You - album under the Rotana guidance . The record was critically acclaimed, but commercially did not do as expected.

In the late 2007, Angham returned with a new album entitled Kolma Ne Arrab - Whenever We are close - the album sold more than half a million CDs across the Middle East and was awarded a platinum certification.

Help us improve this page:   Correct or update the Angham page