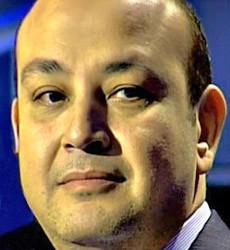 Amr Adeeb (aka Amr Adib) was born on the 23rd of October 1963 in Cairo, and is the younger brother of Emad Adeeb.

Although critical of Gamal Mubarak, Amr was widely known to be a supporter of Hosni Mubarak's regime. Still he was very famous because of his fun populist character, and because of the controversial topics he would often cover in a sensationalist manner on his show. Yet he attempted to shift sides at the very last moment when the Egypt Protests were becoming fruitful. The Egyptians however were not ready to be so easily duped, and called for his boycott. He was also kicked out of Tahrir Square: He had always rallied to the defense of Mubarak and the regime, and when he finally tried to show up in Tahrir Square in an opportunist move, he was expelled immediately by the people.


This led him to later on deliver a tearful speech on national television, asking the forgiveness of fellow Egyptians, as he had been placed in a forced difficult position of submission by the previous regime as he explained it. His popularity dropped dramatically after that, and the ratings also took a strong dip from which he still hasn't recovered.

Amr Adeeb often plays on the Egyptians nationalistic sentiment to win them over, but more importantly to place them in endless conflicts with other Arab countries. This happened with Algeria, over a football match, and with Lebanon over the Resistance and Hassan Nasrallah.

Help us improve this page:   Correct or update the Amr Adeeb page