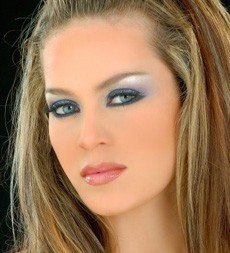 Amelia Zidane is a famous Belly dancer and choreographer from Algeria who was born in Grenoble, France. She is also the Sexiest Oriental Belly Dancer!

Amelia Zidane (or Amelia Zeidan)studied socio-medical sciences intending to become a child psychologist, but her artistic passion drove her to leave her province to Paris in 1994 to pursue her dreams.

She worked several jobs before being noticed by Jacques Boni, Director of the "Trois Mailletz" in Paris.

She Choreographs and directs her own dance spectacles, and has created about fifteen shows of one hour and half each. A true Showgirl!

In 1995, Amelia Zidane danced in a Flamenco-Arabic style, then in the year 2001 moved into an Oriental Modern Dance Show, which is a fusion between hip hop and belly dancing.

In 1999, Amelia Zidane recorded "Sefina" a title which she Co-wrote and interpreted in Arabic, and produced by EMC records. After she was noticed on Hit Machine, she moved to Beirut to present "Paris-Beirut".

She has previously collaborated with the famous D.J Said Mrad and Adam Youssef on the recording of an album.

We quote Aziiz Patel: "She leans as a queen and goes back like a dream... Amelia Zidane lightens up literally the screen."

In the year 2007, Amelia Zidane became even more famous when she was noticed by the producers of The First World Belly Dance Championship "Hezzi ya nawaem", which she helped create and develop with i-magic.

Her contribution added to the success of the TV show broadcasted on LBCI at prime time (watched in the Middle East and around the world), where her personal input as a consultant, coach and member of the jury with Simon Asmar, Najwa Fouad, Zaza Hassan, Nadra Assaf were an added value. An experience renewed in 2008 with Hezzi ya nawaem 2 as a casting director and consultant.

Between 2008 and 2009 Zidane works as a choreographer, dancer and member of jury on Ajwaa at prime time on Future TV.

Amelia Zidane was the 1st belly dancer to appear on the Covers of French Magazines, Elle, TéléMag. She also ranked sixth in Top 100 Sexiest Arab Women 2010, and is believed to be the Best Belly Dancer in the World at the moment!

Below is a teaser:)

Help us improve this page:   Correct or update the Amelia Zidane page