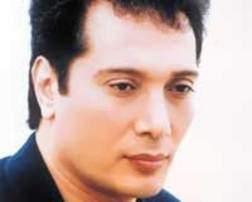 Ali El Haggar also known as Ali Al Haggar or Hajjar is a famous Egyptian singer, he is also an actor.

His real name is Ali Ebrahim Ali El Haggar and he was born on the 4th of April 1954 in Cairo, Egypt.

Ali El Haggar can be placed within the mid generation singers, somewhere between the golden age classical egyptian singers of music and the modern era.

Ali El Haggar has a very strong voice. In the year 1979, Ali graduated from the Helwan University from The Faculty of Fine Arts.

Al Haggar started singing professionaly in the year of 1977 during a live concert in Egypt.

Baligh Hamdi, a famous Egyptian musician discovered him and introduced him to the public.

Help us improve this page:   Correct or update the Ali El Haggar page