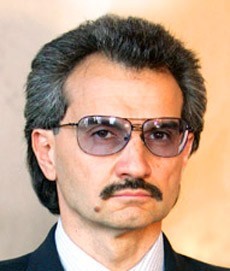 Al Walid has collected his fortune by investing the royal money which he had already in stocks, real estate and various media businesses.

Forbes magazine ranked Prince Al Walid as the 22nd richest person in the world. Time magazine has described him as the Arabian Warren Buffett.

Walid Bin Talal is the nephew of the King Abdullah, the Saudi Arabian King.

Al Walid Bin Talal net worth is estimated to be around US $16 billion, this figure used to be $21 billion in previous years.