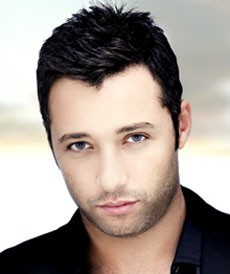 Ahmed Fahmy also known as Ahmad Fahmi is a famous singer from Egypt.

Ahmed Fahmy started his music career by singing in the band group WAMA along with Mohammad Nour.

He Was born on March 17th in Cairo. Ahmed Fahmy is elegant, attractive and married.

Besides being the lead vocalist, he plays the violin, writes lyrics and composes some of the band music.

After he decided to create the band with Mohammad, he noticed the enthusiasm of Shami and Waddour and so they joined the band.

Ahmed Fahmy won many classical competitions around the world , the last one was in spain 2001.

Mouhamed Abdel Wahab and Fairouz are his icons, he considers them as the most talented and respected artists in our music history.

Fahmi's loves to become an actor, His first role was in 2007 in a movie called Khaleeg Neama with the star Ghada Adel.

Help us improve this page:   Correct or update the Ahmed Fahmy page